Online slots enthusiasts are of major importance to Bovada Casino, an online gaming site based in the Kahnawake Mohawk Territory in Canada. In business since 2011, Bovada Casino features more than 160 slots titles, powered by Betsoft, Real Time Gaming and Rival software that deliver vivid graphics, animations and sound effects.

Some of these titles are original games exclusive to this site. The range, both in themes and in formats, is extensive, and players can search using a variety of filters: Five Reels, Three Reels, Video Slots, etc. Bovada Casino offers 20 Progressive Jackpots Slots, with titles like Cash Money Mermaids, Dragons, Major Moolah, Chase the Cheese and Strike Gold, or even Jack the Ripper, for those in a macabre and ghoulish mood. Jackpots in the thousands and tens of thousands can be won on these titles.

Classic Slots fans looking for fruit-machine style three-reelers with one pay line can try Sevens and Bars, one of 27 three-reel titles offered. Among the 3D Slots titles, popular games are 2 Million BC, Heist and Gladiator.  The Special Slots choices include Back in Time, a combination of Slots and a Tic-Tac-Toe game. In general, Slots themes cover a wide range: science fiction like A Switch in Time, TV parodies with As the Reels Turn, New Age astrology in Astral Luck, sports, hobbies and pastimes with Aussie Rules; or Bowled Over, legendary treasures and historical conquests in Aztec’s Treasure; or Caesar’s Empire, evocative decades that inspire Doo-Wop Daddy-O and even popular horror such as The Ghouls; or Zombiezee Money. 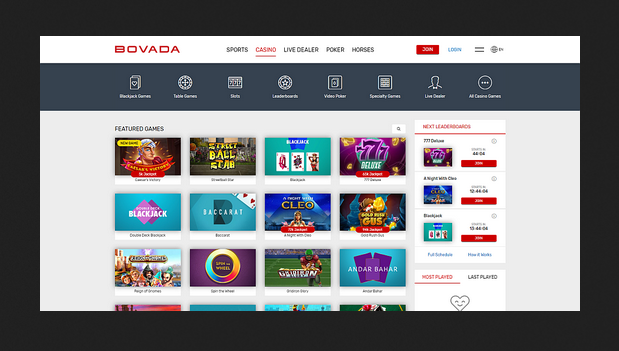 Bovada Casino operates in English and US dollars only; in fact, its largest market is in the US, although the site accepts players from all over the world except Canada. It is up to players to first ascertain the gambling regulations in their local jurisdictions, however; some countries ban online casino play completely, while others restrict players to casinos registered in specific jurisdictions.

Players can make deposits via Money Transfer, MasterCard, Visa, Visa Debit and Visa Electron, and withdrawals are paid via Fast Bank Transfer or Cheque. Excellent customer support is available through live chat online, email or a toll-free US telephone number. Details of Bovada Casino’s Welcome Bonus and other promotions can be found on the site itself.

Since 1996, the Kahnawake Gaming Commission (KGC), located within the Mohawk Territory of Quebec, has become an extensive regulator of online gaming site worldwide. The KGC granted Bovada Casino a license in 2011, after the casino’s acquisition from original owner Bodog Casino by the Morris Mohawk Gaming Group, its current owners. The KGC licence, along with an audit certificate by independent Australia-based evaluators Gaming Associates, is a reassuring indication that the site’s games are fair. Bovada Casino also uses 128-bit SSL encryption and a strict privacy policy to keep player data and contact details secure. The site’s audited records show that the average return-to-player percentage is 97.74%.