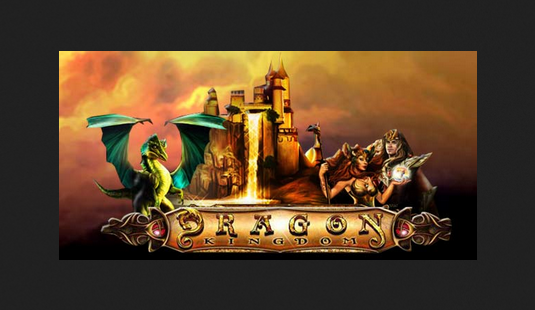 There is a spot of romance and magic in the richly detailed artwork of the Playtech online slot Dragon Kingdom, but no storyline as such. A king and queen, both with flowing blonde locks, rule the land, their crowns of gold, gems and feathers adorned with wings that show their link to the fiery green dragon that protects their realm. The symbols are drawn from tales of sorcery and fire-breathing beasts.

There are two things that make Dragon Kingdom special, however: the novel selection of bonus wins that crop up, of which more anon, and some exquisitely detailed design. Even the opening screen is a beautiful landscape featuring a fantasy castle overlooking a mountain waterfall, while the bejewelled golden reel frame holds transparent reels, to show the breath-taking backdrop beyond. In base play, this is a blood-red view of the river from the castle at sunset. During the free spins round, it changes to a moonlit, storm-tossed seascape.

Many Matches from 11 Payline Symbols

Dragon Kingdom slot on the web features 20 adjustable paylines, and players can bet between 1 and 5,000 coins per line. Winning combinations require at least three of a kind from all the payline symbols except the top three, which win prizes for two matches or better. Matching symbols must start at Reel 1 and continue in sequence along a payline to win. The low-value symbols 10, J, Q, K and A, drawn in fiery letters that burst into animated flames when they win, have prizes as high as 150 coins for five of a kind.

The medium-value icons are a jewelled dragon brooch, an intricately bound spell book and a collection of colourful potions. They all win equal-value prizes, with 200 coins for five matches. The queen, king and dragon, who is also the Dragon Kingdom’s Wild icon, score prizes for two matches or more, and for five of a kind they win 750, 1,000 and 2,500 coins, respectively. However, Dragon Kingdom has a feature that makes six matches possible.

A glowing dragon’s egg is the Dragon Kingdom slot’s Split icon. If it appears anywhere on Reel 5 when winning combos have occurred on one or more paylines, a small dragon flies in and blows a gout of fire onto the last matching symbol on each winning combo, splitting it into two matching symbols. So two of a kind will become three of a kind, three will become four, etcetera. If a Split appears when the player has a five-of-a-kind match, the result is six of a kind.

Even the Dragon Kingdom Wild can be spilt this way, thus increasing several payline wins if substituting for different symbols at the same time. So top prize for any of the medium-value icons is actually 2,500 coins for six matches, and the queen, king and dragon can win as much as 3,000, 4,000 or 25,000 coins.

A picture of the cliff-top kingdom is the Dragon Kingdom Scatter, winning 6, 66 or 666 coins for three, four or five appearances anywhere. Three or more also trigger a round of 15 free spins, with a random initial multiplier between X2 and X5. Every winning spin moves the multiplier up one level, to a maximum of X5, but losing free spins move it down one, to a minimum of X2.

The Scatter becomes an extra Wild during free spins, and when acting as a substitute, it can also be Split, increasing its winning potential.