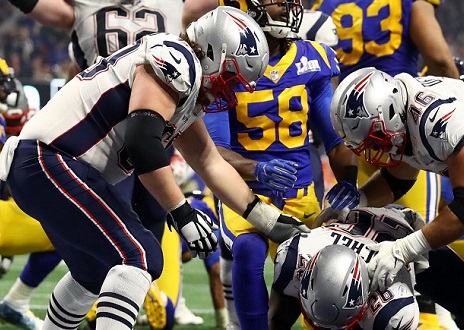 The Super Bowl is a match which is played between the final teams still fighting at the end of the NFL season in America. This match is huge and basically brings the country to a stop as everyone wants to watch it. The Super Bowl is always played on a Sunday, so that most of the American population can watch it.

The NFL season runs from September to round about the beginning of February. It is one of the most widely watched sports leagues in the world, even by people who do live in America. People from all over the world place bets on the Super Bowl on a wide range of things.

These are numbers which change from bookie to bookie. The more popular the team is to win, the lower its odds will be. If a team is an underdog and would take a miracle for them to win, they have very high odds. Betting on a popular team with low odds is the safest way to go, but will not award you with as many winnings as if you bet on an underdog team with very high odds and they win. Check out a number of bookies to find the best odds before you commit your money.

A Point Spread is the amount of points that the winning team has to win by to be counted as a win. This spread is set by bookmakers and is unique for each game. If there is a six point spread, then the Panthers, who are the favourites, have to beat the Broncos by at least six points. The spread can change right before a game, depending on how the public is voting as to who the winner will be. When indulging in online sports betting, you need to take the spread into consideration and bet accordingly.

An Over/Under bet is a bet against a number which has been estimated by a bookie. The bookie will make a guess as for the final score for both teams, and add them together. You then have to guess whether the real final score will be higher or lower than what the bookie estimated.

These are bets which are aimed at trying to help punters place bets. A moneyline bet gets rid of the betting line by evening out the proverbial playing field. Out of the two teams which make it to the Super Bowl there will always be a favourite. A moneyline bet handicaps the favourite before the game even begins, giving the underdog a bigger chance of winning on the punter’s books. This makes for much more exciting betting.

Many bookies will offer various bonuses and promotions in the run up to the Super Bowl, much like an online casino will. These are aimed at attracting punters through their proverbial doors. There are hundreds of thousands of people from all around the world who wish to place bets on the Super Bowl and bookies want to get as many of them as they can onto their books.

Often to take advantage of a bonus or promotion you will have to sign up with a bookie or a betting site. Make sure that the site which you choose has not only the best odds but is also totally reputable and well known.